Situated in the southwestern part of the city, this park offers one of the largest expanses of undeveloped open space in the community. Naturalized wooded areas, open space, and select native prairie grass areas are the primary attributes of this park. With the exception of a covered shelter and some road improvements, this park has been left mostly undeveloped.

A number of trails are in place around the park including the "Eight Weeks Trail" on the west end of the park. This trail was developed by the Park Conservation Crew in 1998. There is also a trail on the east and south edges of the park that traces the original path of the Fort Riley Leavenworth Military Trail System used by the United States Cavalry.

Warner Park is the home of City of Manhattan's first disc golf course. The nine-hole Warner Park Disc Golf Course was established in the spring of 2010.

If your activity requires a large open space, you should consider Warner Park. Access to the park is limited to walk-in traffic through the main gate and the disc golf parking lot off Shuss Road. In certain circumstances, special arrangements are made for larger groups through the Manhattan Parks and Recreation Department. 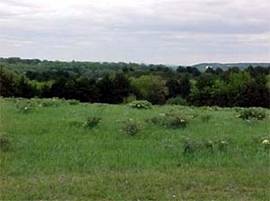